Bright eyes in the allergy season

Patients whose eyes water during pollen season may be suffering from allergies. Alleviate the symptoms with OmniVision eye drops without preservatives.

If your eyes are watering, red and your eyelids are swollen, this is frequently a reaction to allergens from the environment. If you don’t alleviate the problem, it can quickly turn into conjunctivitis. Itching and burning eyes are a sign that our immune system is perceiving pollen and other allergens as intruders. These are typical hay fever symptoms.

Quick and long-lasting effectiveness – without any preservatives

Allergic reactions to airborne substances usually involve the parts of the body that serve as entrance portals for irritating substances. These are primarily the mucous membranes of the eyes, nose and throat. The eyes are often reddened and swollen and itch severely. In contrast to eye irritations caused by infections, an allergic reaction usually affects both eyes. Additional symptoms may include rhinorrhea and frequent sneezing.

Allergies can be caused by substances that are present seasonally or year-round. Seasonal allergens include the pollen of various types of grass, herbs, grains, or early blooming trees.

For allergic eyes, OmniVision offers products with three different active ingredients. The eye drops with azelastine (Azela-Vision®) or ketotifen (Allergo-Vision®) have a triple action: they stabilise the mast cells of the immune system, block the receptors of histamine and are anti-inflammatory. They offer relief within a few minutes. In addition, OmniVision also provides duraultra N sine anti-allergy eye drops for short-term use. The active ingredient naphazoline helps to constrict the dilated blood vessels in the irritated eye, reducing the swelling of mucous membranes. Watering of the eyes is reduced. In order to prevent allergic reactions as well as irritation to already inflicted eyes, they do not contain preservatives. Preservatives themselves can trigger allergies.

The active ingredient azelastine is an anti-allergy substance that prohibits the production and release of inflammatory substances such as histamine. In an allergic reaction, histamine is released from the cells of the immune system, the so-called mast cells. Azelastine has a stabilising effect on these mast cells and thus prevents the continued release of stimulant transmitters. The azelastine additionally binds to specific cell receptors for histamine, the so-called H1 receptors, inhibiting the transmitter. With its anti-inflammatory (antiphlogistic) effect, azelastine reduces the symptoms of allergic conjunctivitis and prevents it.

The soothing effect of the eye drops with azelastine is felt after only a few minutes and lasts for up to 12 hours. The products are also suitable for children from four years of age with seasonal allergic conjunctivitis.

The active ingredient ketotifen is anti-allergic, similar to azelastine. Ketotifen is also used for seasonal allergic conjunctivitis.  It also stabilises the mast cells, blocks the H1 receptors and is anti-inflammatory. Eye drops with ketotifen are also effective within minutes. They are suitable for children aged three years and over and for breastfeeding mothers.

Eye drops with the active ingredient naphazoline are suitable for the short-term treatment of non-infectious or allergy-related conjunctivitis. Naphazoline quickly reduces the redness due to its constrictive properties and and decreases the swelling mucous membranes.

Our eye drops for allergic eyes 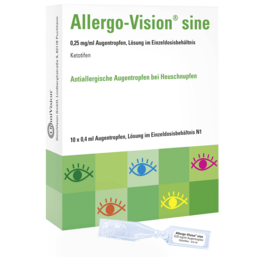 Acts within a few minutes, suitable also for children aged 3 and over and for breastfeeding mothers. Available starting with a small 10-dose pack 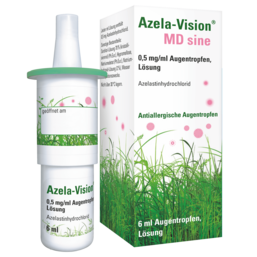 Fast-acting and also in the convenient SafeDrop® bottle without preservatives 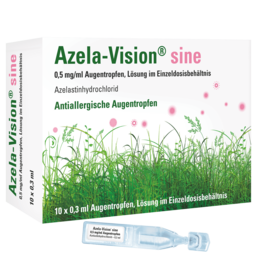 Acts within a few minutes. The only Azelastine eye drops that are also available in small packsize with 10 single doses. 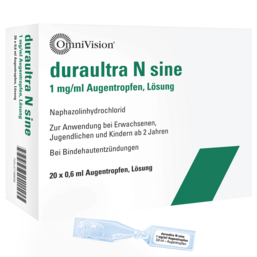 Due to the German Drug Advertising Act, product-related information on prescription drugs may only be provided to physicians and pharmacists. Please register for the specialist group area.

This website uses cookies. Those have two functions: On the one hand they are providing basic functionality for this website. On the other hand they allow us to improve our content for you by saving and analyzing anonymized user data. You can redraw your consent to using these cookies at any time. Find more information regarding cookies on our Data Protection Declaration and regarding us on the Imprint.